Often titled The Land of Fire and Ice, the compact island country of Iceland treats the visitor to dramatic mountain scenery, abundant glaciers, gushing waterfalls, soothing hot springs, and much more. The sun barely sets in the Icelandic summer while the winter months afford the chance to sight the Aurora Borealis, away from populated areas. Uncrowded and pristine, Iceland is easily navigated and enjoyed. 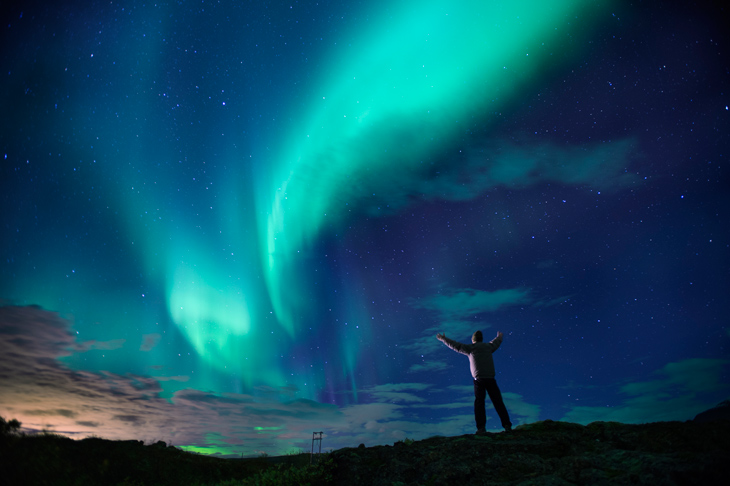 With the lights visible for eight months from September to April, Aurora Borealis viewing in Iceland benefits from less cloud cover than other northern locations and solar activity forecasts allow you to plan accordingly. Taking its name from Aurora, the Roman goddess of the dawn, and Boreas, the Greek name for the north wind, the phenomenon is caused by a solar wind of electrically charged particles encountering the earth’s magnetic field.

As they’re funneled towards the north and south poles, the particles undergo ionisation and we see lights overhead; often bright green, but they can also be white, purple, red, pink, orange, or blue, depending on elemental composition. 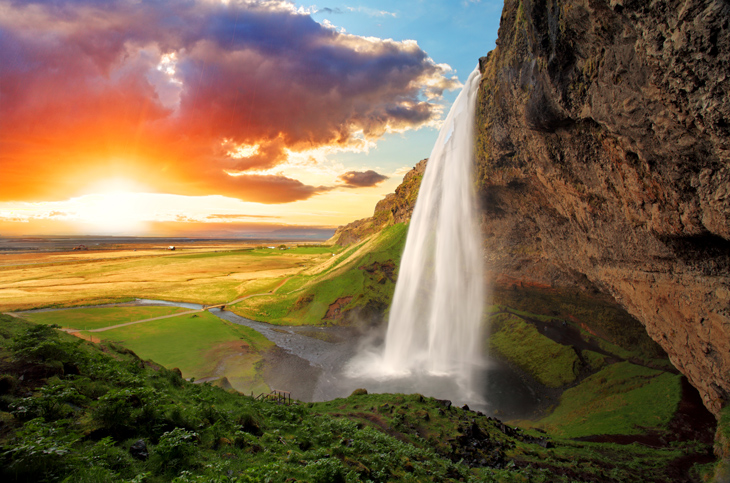 Probably Iceland’s most famous and photographed waterfall, sixty-metre-high Seljalandsfoss has as its source the glaciers of the Eyjafjallajokull volcano.

Easily accessed from the island-circling Ring Road (Route 1) and less than two hours drive from Reykjavik, the waters of Seljalandsfoss fall over an ancient sea cliff, to feed a meadow, that in the summer is filled with colourful wildflowers.

About a ten-minute walk away, within a rocky chamber and behind a large cliff, lies the ‘hidden’ waterfall Gljufrabui (Gljufrafoss). Foss means waterfall in Icelandic, and the country’s many waterfalls result from a wet climate, with abundant rain and snow; water is stored within large glaciers, which then melt in the summer. 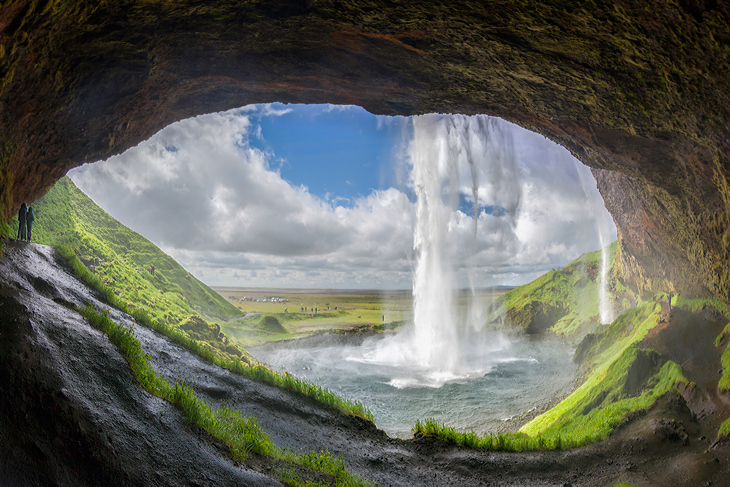 While the Seljalandsfoss waterfall can be declared beautiful from any angle, its uniqueness amongst its Icelandic peers is due to an easy walking path, that travels literally behind the 25-metre-wide falls, providing an exceptional view when looking outwards from the ‘inside’ of the falling waters.

Seljalandsfoss is often combined in a day excursion with another nearby waterfall, Skogafoss, just thirty kilometres to the east. Its name meaning ‘forest falls’, Skogafoss is one of the largest waterfalls in Iceland and known for its frequent double rainbows. 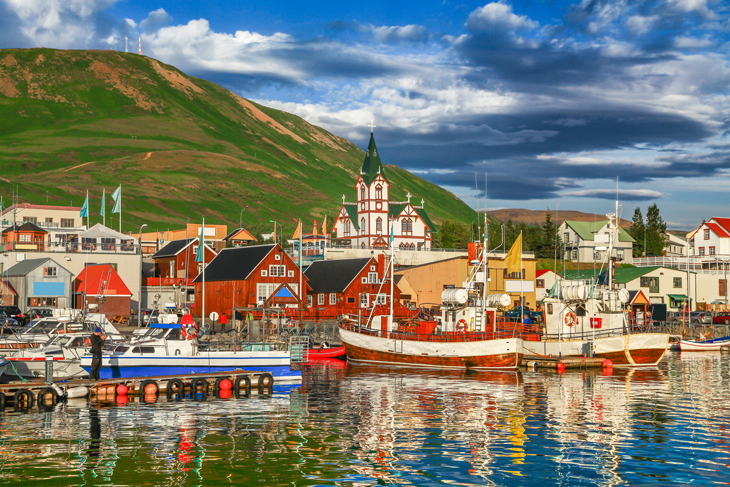 Its name meaning ‘Bay of Houses’, the northern Icelandic coast town of Husavik can claim the title of the country’s earliest settlement, first inhabited in the year 870.

While fishing is still strong in Husavik, many visitors come for whale watching, as well as nearby attractions along the Diamond Circle Route, such as Lake Myvatn, the thundering waters of the powerful Dettifoss Waterfall, the port of Akureyri, and Eider Falls.

The most recognizable landmark in town is a cross-shaped wooden church that dates to 1907- when built, the whole town population could fit into the building. 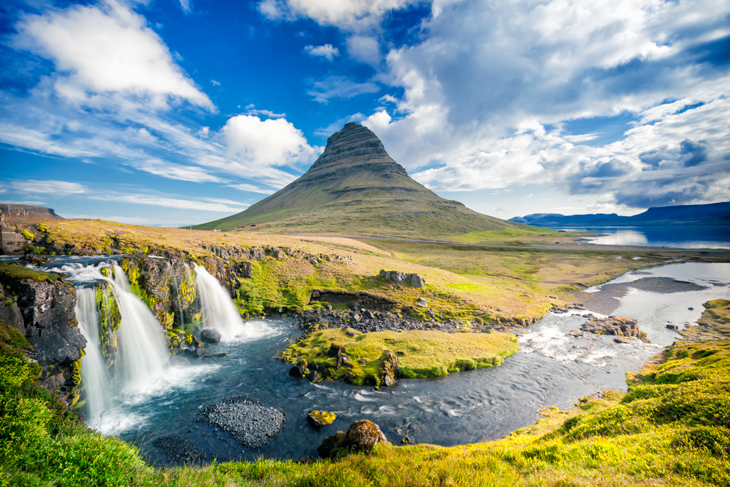 Possibly the most photographed mountain in Iceland, Kirkjufell Mountain near the town of Grundarfjordur is a highlight of West Iceland’s 90-km-long Snaefellsnes peninsula.

Its name meaning Church Mountain, Kirkjufell is an isolated peak, jutting fiercely out into the sea; its steep sides are a result of pressure, placed on the rock when it was squeezed between two glacial tongues.

The mountain can be climbed in about 90 minutes or there is an easy walking trail around the base, as well as to the three-pronged Kirkjufellsfoss waterfall.

Aurora over the Jökulsárlón Glacier Lagoon 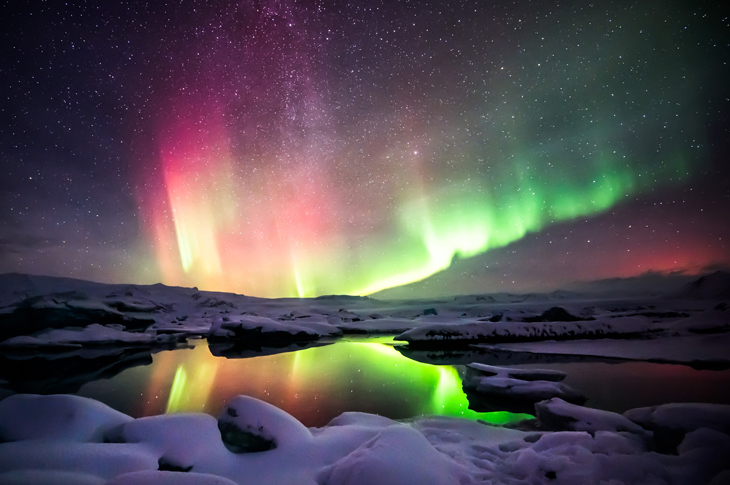 A relatively new attraction along the Ring Road in Southeastern Iceland, Jokulsarlon Lagoon did not exist, prior to a warming trend that started around 1920. Due to increased melting of the Vatnajokull glacier (one of Europe’s largest), Jokulsarlon has experienced rapid growth to become Iceland’s deepest lake at 245 metres and, at present, covers eighteen square kilometres.

The name Jokulsarlon means ‘glacial river lagoon’ and guided boat tours are offered amongst the icebergs through the summer months, while winter brings out the Aurora seekers to enjoy this peaceful and remote locale, which in a century’s time may become a deep fjord.

The lagoon is adjacent to Vatnajokull National park, Iceland’s largest, and the nearby black sand beach is called Diamond, because of the sparkle of the ice crystals.

Vestrahorn Mountains on the Stokksnes Peninsula 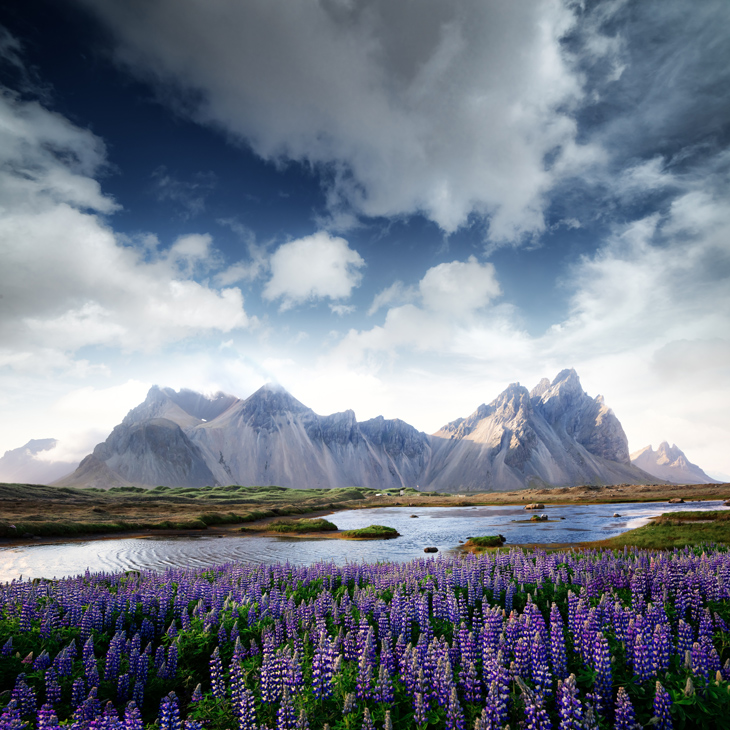 Just ten kilometres off the island-circling Ring Road near Hofn, dramatic 454-metre-tall Vestrahorn – also called Batman Mountain – is a photographer’s favorite, though all three are worthy of attention.

Beneath the steep slopes of these peaks, lie picturesque black sand beaches and dunes, and one of the first settlements in Iceland has been identified nearby. 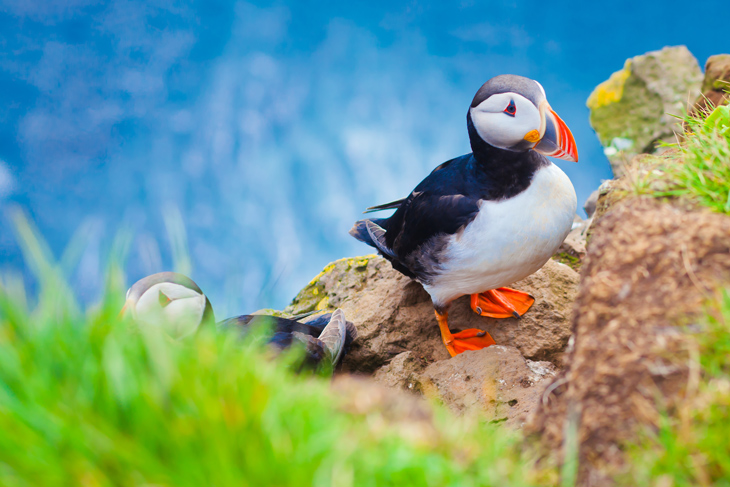 Sometimes nicknamed ‘sea parrots’ because of their brightly coloured beaks, sixty percent of the world’s population of Atlantic Puffins make their home in Iceland for a total of 6-10 million birds in the summer months.

In the remote Westfjords corner of Iceland, the fourteen-kilometre-long and 441-metre-high Latrabjarg Cliffs afford a unique chance to get up close and personal with these nearly tame birds, that make their nests within the holes underneath the cliff’s edge.

Atlantic Puffins nest in lifelong pairs and raise the chicks as a couple in the same places, where they were themselves born, and only with other puffins present. As the largest seabird cliff in Europe, Latrabjarg is the most visited tourist attraction in the lightly populated Westfjords region. 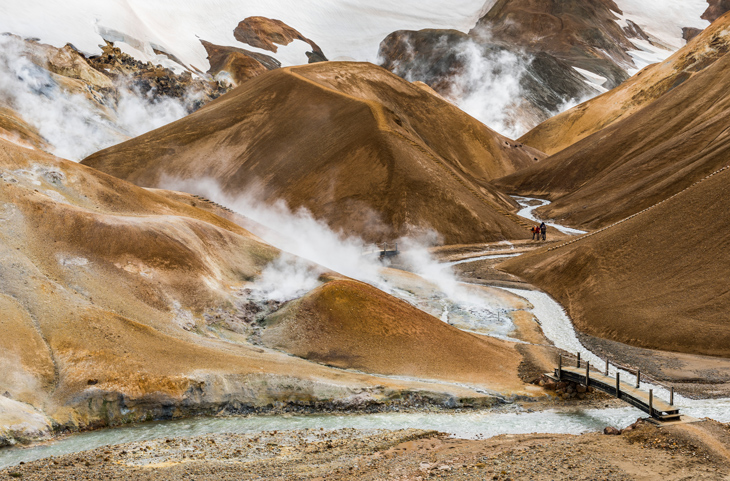 Located in the center of Iceland – an area dominated by volcanic desert highlands – is the 100-square-kilometre rugged mountainous area of Kerlingarfjoll, rising 500-700 metres above the surrounding terrain.

The highest of the peaks, Snaekollur, on a clear day affords views of Iceland’s three large glaciers and both the north and south coasts of the island. The name of the range means ‘woman’s mountains’ and a local fable tells of a troll woman turned to stone, returning from a fishing expedition.

Enjoyed by hikers and skiers, Kerlingarfjoll is a short detour off the cross-island Kjolur Highland route, as well as a short drive from the extensive and active Hveradalir geothermal area.

A Volcanic Eruption Up Close 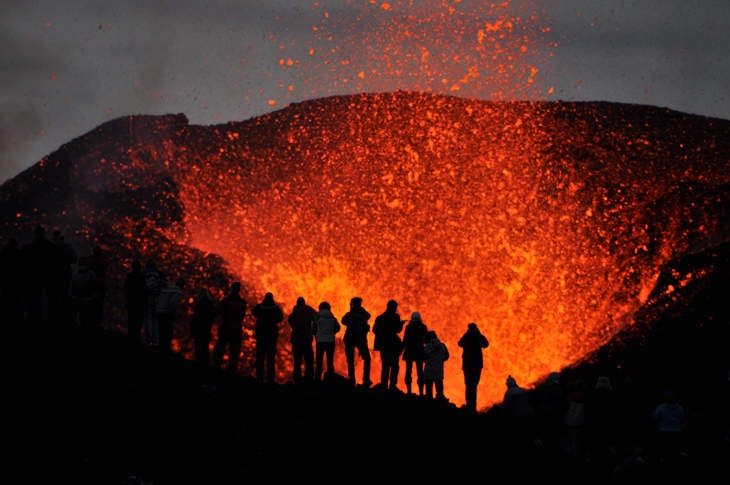 Straddling the Mid-Atlantic Ridge means Iceland is divided between the North American and Eurasian tectonic plates and thus, an intensely active area for volcanism in its many forms. There are thirty active volcanic systems in Iceland; thirteen have erupted in the past 200 years of Icelandic history.

The two plates are moving away from each other at the rate of 1 to 20 cm per year underneath the ocean in what is called sea-floor spreading; molten rock then wells up from the gap as basaltic eruptions, creating a string of volcanoes along its length.

Iceland is the largest spot along the ridge, where the mountains poke above the ocean waters as islands and the country averages a major volcanic event every five years.